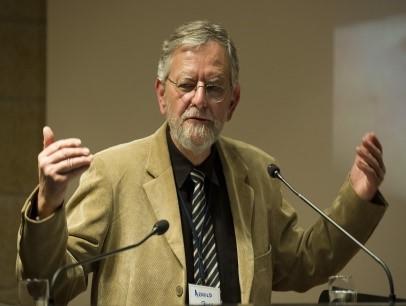 Arnold lives in Jerusalem where he is a manager, technology commercialization specialist and lawyer.

“What I remember most about Elwood High is the truly outstanding teachers. Alex Fugedi who taught us German; Mrs Lewulis, the French teacher who was with the Resistance during the war; and Mr Whitehead the English and drama teacher and a gentleman with a true cultural air about him. These teachers especially stand out.

“Like me, many of the students in the school were of Jewish background. Our parents often knew each other and most spoke Yiddish at home. Like other children of recent immigrants, our parents wanted us to do well in our studies and there was a real commitment to getting ahead. My father, a photographer, had a lot of Italian and Greek customers and I was also friendly with students from Greek and Italian backgrounds at school.

“I didn’t mind the uniform that we all had to wear, including the caps and boaters, but do remember that we used our compasses to dethread the crimson, yellow and black Elwood High school tie to upgrade our ties with more interesting patterns.

“I did not enjoy AFL football or cricket but made the school relay team in athletics and did well at the triple jump, usually having to “jump off” against another boy to get into the team.

“When I was in Form 4 in 1967, the Six-Day War in Israel was a real turning point for me. My parents, born in Poland, were both survivors of Auschwitz and the Holocaust and I was very tuned into their emotional state. I wanted to learn more about my Jewish background and wanted to go to a Jewish school so I completed Form 5 and 6 at Mt Scopus College. It was around this time that I taught myself Yiddish. My father, who spoke multiple languages did not speak especially good English and I wanted to be closer to him and to be able to understand more of the stories that my parents’ friends were telling around the card tables at night.”

Arnold studied Economics and Law at Monash University (1970–1974) and became a city solicitor. In 1988, he and his New York-born wife moved their young family and professional practices to Israel. In 2001, they set up the Malki Foundation to provide assistance to families with severely disabled children, in honour of their daughter Malki who was killed in a terrorist attack in Jerusalem in 2001, aged 15. Malki had dedicated herself to caring for people with disabilities, starting with her own youngest sister who needs round-the-clock care.

After many years of service to the special-needs community, in 2013 he and his wife were honoured with a Lifetime Achievement Award for volunteerism by Israel’s Minister of Social Affairs. They have been interviewed frequently for radio, television, print media, CNN, BBC, New York Times, Al Jazeera.