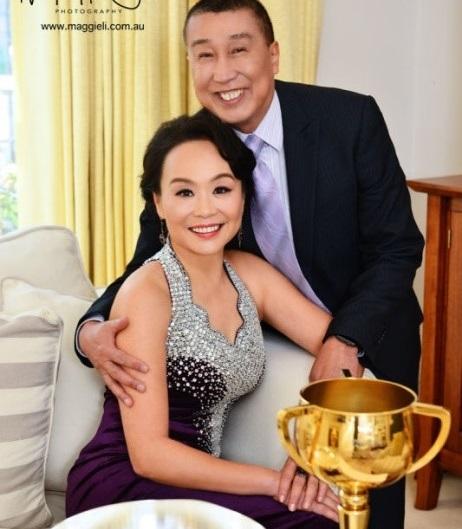 Barry has a Mechanical Engineering degree but his real passion was always martial arts and he founded one of the first Kung Fu schools in Melbourne in 1974. With an entrepreneurial spirit, he has other interests in property, art consultancy and horse racing. When he joined forces with trainer Gai Waterhouse and other syndicate owners, his horse Fiorente won the 2013 Melbourne Cup. He is pictured above with his wife Anne, with the Melbourne Cup trophy.

“My parents were both born in Canton, in China, and came to Australia at the end of WWII. I was born in Australia. In the late 1950s we lived above our delicatessen in Acland Street. My father would cook legs of ham in a huge copper pot to sell in the shop and my mother made home-made pies which were very popular. We knew all the owners of Chinese restaurants in the street and I knew John Zeleznikov, who went to Elwood High, as his parents ran the café Scheherazade.

I went to St Kilda Park Primary School, Elwood Central for Form 1 (Year 7) and then Elwood High for Years 8 – 12. I have such fond memories of Elwood High and still see a lot of friends from those days. I was struck by the large number of Jewish students at the school; they were competitive and hardworking and academically the school was very strong. I remember that our form got 16 Commonwealth scholarships one year.

The teachers were a mixed bunch. They all wore academic gowns and were very serious. I was a bit naughty at school and one day I got the strap from Mr Will, the Deputy Principal for play wrestling with my friend in the corridor. Mr Will thought we were fighting and the strap, which had special heavy leather at the end, hurt. We had Mr Will for Pure Maths. He would photocopy the whole of the Maths syllabus for the year and we would be expected to work through the exercises in class and at home. He would write the solutions to problems on the board but there was very little real teaching or discussion.

I played in the school footy team, and also played cricket. I had been taking Tae Kwon Do lessons since primary school at St Johns Church in Elwood. In Year 12 you could choose to do sport or do private study at home. I was the only student in the whole school who elected to do sport. I invited the Tae Kwon Do instructor to come to the school to teach students, and I helped him during sport times.

There were only two other Chinese or Asian families at Elwood High when I was there. Most of my friends were Jewish. There was racism in Australia at that time but not at Elwood High. It was such a multicultural school. Being a student there enabled me to mix with anyone and I learned how to network and market.

In Year 12, the school dispensed with Prefects, chosen by the teachers and Principal, and allowed students to vote for their representatives. I had friends in Years 10, 11 and 12 so I got them to help me campaign and I was elected.”

Barry wanted to study at Monash University because it was a new campus, and it was lively because of the student protest movement against such things as the Vietnam War. He enrolled in Mechanical Engineering but never enjoyed the course and wanted to drop out after first year. His parents insisted he complete the four-year degree. As soon as he did, he headed off to Hong Kong for a year to study martial arts under Bruce Lee's famous Wing Chun instructor, Wong Shun Leung.

Lee died the year before Barry arrived in Hong Kong. Lee’s father was related to Barry’s mother and they were from the same village in Canton. On his return to Australia, Barry started teaching martial arts and, although he also completed a Diploma of Education and taught Maths and Science for a year, he was soon teaching Kung Fu full time. He founded one of the first Kung Fu schools in Melbourne in 1974. These schools have produced many state and national champions.

In 1996 Barry was awarded the Blitz Hall of Fame Kung Fu Tribute Award, the most prestigious award in Australia.

By the late 90s Barry had diverse interests in property, the share market and other businesses and began an art consultancy firm, dealing in Australian fine art with his wife Anne. They set up a gallery business and became keen art collectors, amassing an impressive collection that featured some of the biggest names in Australian art history. They sold the collection in 2015.

His other real passion has become horse racing. He joined the stable of the highly regarded trainer Gai Waterhouse and the horse which he part owned, Fiorente won the Melbourne Cup in 2013. The story of Barry’s life and journey to the Melbourne Cup featured in an ABC TV story in 2013 (see first link below).