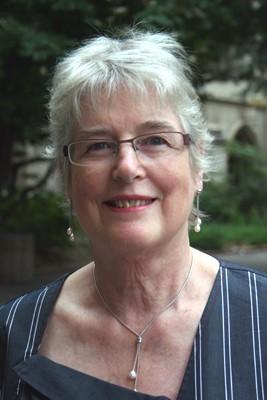 Bronwyn Hughes is a glass artist, teacher, lecturer, and art historian, specialising in stained glass and is a consultant to heritage architects and organisations. Her research interests are in stained glass history and conservation, nineteenth century art and architecture and twentieth century sculpture. Since completing her PhD on Anglo-Australian stained-glass artist, William Montgomery, she has been compiling and editing the first encyclopaedia of Australia’s stained glass makers and researching stained glass war memorials. She was awarded an OAM in 2019 for services to fine arts.

Bronwyn grew up in Elsternwick and attended Elwood Central School up until the end of Form 2. (Year 8). She and others at the school watched excitedly across the canal as the brand new school; Elwood High was built, and eventually after building delays, moved across in 1957 for the start of Year 9.

Bronwyn remembers her three years at Elwood High with great fondness and believes she “learned so much” from being in a school with many students from Jewish background, whose parents were Holocaust survivors and refugees from war torn Europe.

With only two year levels at the new school, she found the learning environment delightfully “intimate”, with a group of generally caring teachers, many of whom were only a few years older than the students.

She particularly enjoyed lessons with geography teacher, Mr Simpendorfer who introduced students to the material coming out of the International Geophysical Year (1957 to 1958). She remembers feeling proud about an essay she wrote on nationalism for her history teacher of the time; Mr Radvansky. Bronwyn also wants to recognise her art teacher at Elwood High, Mr Flynn who “made art a joy that became a career”.

In Year 11, when Elwood High was not able to offer all the subjects she wanted to study, and there was not yet a Year 12 class, she moved onto University High. She remembers getting into Uni High; not because of her academic results, but because she was good at basketball.

It was during a holiday job in a dress factory in Richmond, that Bronwyn moved from running the cutting room to incidentally designing patterns for young fashion designer Prue Acton’s first range of clothes for the youth market. Bronwyn loved this work and stayed for 3 years.

After the birth of her three children, Bronwyn completed a Bachelor of Arts (Ceramic Design) at the Caulfield Institute (now Monash University) and majored in glass. This included blowing glass, engraving, sand blasting and lead lighting. “It was just right for me”, she said. It became her lifelong passion.

She went on to become a senior lecturer and then Head of Glass at Caulfield Institute from 1981 – 1997 and during this time also exhibited her work in galleries in Victoria , NSW and Canberra.

Whilst teaching part time she completed an MA Prelim at Melbourne University in 1991 - 92 under some inspiring lecturers including Professor Margaret Manion AO who is recognised internationally for her scholarship on the art of the illuminated manuscript. She continued on then to complete her Masters in Fine Arts by 1997.

Whilst still teaching at Caulfield Institute she then was approached to teach at Holmesglen TAFE ‘s apprenticeship in leadlight and stained glass. She continued designing courses and teaching at Holmesglen for a number of years and then embarked on her PhD in 2000, when descendants of William Montgomery, a celebrated  English stained glass artist who emigrated to Melbourne, granted her access to his numerous papers, sketchbooks, cartoons and other items amassed over his lifetime.

Bronwyn completed her PhD “Designing stained glass for Australia, 1887 – 1927, the art and professional life of William Montgomery”, University of Melbourne, in 2007.

With her desire to develop and promote the use of Australian glass in art and architecture she was founding Chair of the not-for-profit Glaas Inc (Glass, Light, Art, Architecture, Synergies) in 2015. The organisation goes from strength to strength through education, research, exhibitions and publications.

Bronwyn was also a founding member and Vice President of the highly regarded Duldig Studio Museum and sculpture garden in Malvern. Duldig was the former home and  studio of sculptor Karl Duldig (1902-1986) and his wife - artist and inventor Slawa Duldig née Horowitz (c1902-1975).

In 2020, she is in the last stages of writing a book entitled, “Lights Everlasting: Australia’s commemorative stained glass from the Boer War to Vietnam”. The book will be published in 2021.