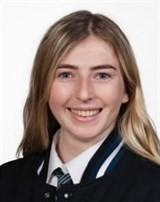 Elwood College congratulates Georgie Stone with an ATAR of 86.80

Georgie Stone was the 2018 joint College Captain, an ambassador for LGBTQIA+ community, a tireless transgender rights campaigner and the 2017 Victorian Young Australian of the Year. She has made appearances on shows such as Four Corners, The Project and Australian Story. In 2017 she won the Young People’s Human Rights Medal awarded by the Australian Human Rights Commission. She is also the recipient of other awards including GLOBE Person of the Year, the Making a Difference Award, the Australian Defence Force ‘Long Tan Award’, the Young Voltaire Award and is the ambassador of the Royal Children’s Gender Service.

In 2017 for International Women’s Day she was named by Mamamia as one of 15 young women under 20 worldwide who are making a difference.

Georgie has performed as a singer and been very involved in all school productions during her time at Elwood College.

In Year 10 she was accepted into the University of Melbourne’s Kwong Lee Dow Young Scholar’s Program, an academic enrichment program designed to support young students with impressive academic and leadership skills.

Among her many public appearances and speeches this year she was invited to dine at Government House, Victoria to meet the Duke and Duchess of Sussex and met the Prime Minister at an event in Sydney some days after.

In 2018 Georgie won the VCE subject award for English, and is now undertaking a Bachelor of Arts at the University of Melbourne.