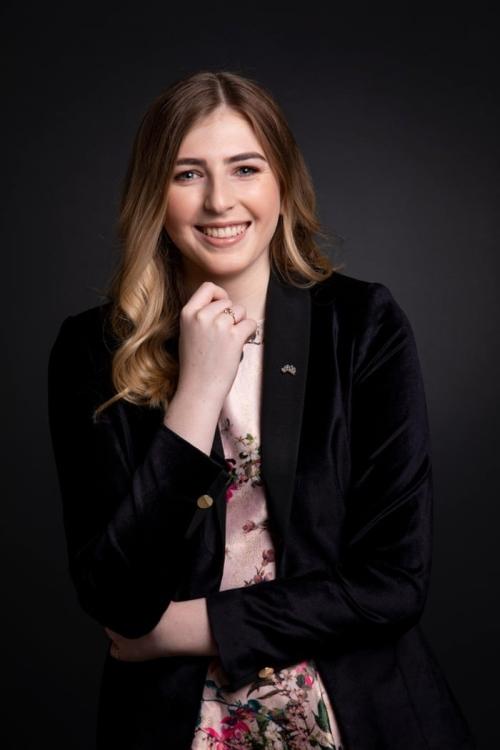 Georgie was co-school captain in 2018 and is an emerging actress in the TV series “Neighbours.” She is a transgender rights advocate, and in 2013 mounted a successful petition to the Family Court of Australia which changed the law to allow transgender children to access stage one treatment.

In 2016, she won GLBTI Person of the Year from the GLOBE community awards and the Making a Difference award from the Anti-Defamation Commission; the youngest recipient for both. In 2017 she won the Liberty Victoria, Young Voltaire award and the Young People’s Human Rights Medal, and in 2018, the Victorian Young Australian of the Year. She was Hero of the Year at the 2019 Australian LGBTI Awards and won the Channel 7 Create Change Award for Young Achievers. Georgie has regularly been interviewed for television and radio, in Australia and overseas, and is the ambassador for the Royal Melbourne Children’s Hospital Gender Service, the Human Rights Arts and Film Festival, Wear it Purple Day and the AFL Pride Game (2018). In 2019 she was named ambassador for the Australian Pinnacle Foundation which helps LGBT+ young people position themselves for success.

In 2020, she was honoured with a Medal of the Order of Australia,(OAM) becoming the youngest to be recognised that year. Her mother, Rebekah Robertson, who founded Transcend, the very first parent led peer support group for transgender kids and their families in Australia, was also awarded the OAM. Rebekah’s book “About a Girl” (Penguin Australia 2019) is her deeply moving personal story of raising and supporting Georgie. Benjamin Law, Australian author and journalist, described the book as 'A remarkable document of an Australian civil rights landmark and a moving testament to the ferocity of parental love.”

Georgie has very high praise for the supportive school community and culture at Elwood College and for the high calibre of teaching. “Elwood was vital to my growth as a person and my time there taught me everything about leadership, about how to be a good writer, about how to be confident on stage and it developed my loved for reading”.

Georgie described past Principal Rhonda Holt as “an incredible” Principal.. it was obvious how “much she loved us and the school and wanted us to have the best opportunities to thrive and be our best.”

Georgie was similarly inspired by a number of her teachers. The discussions about the classic novel “To Kill a Mockingbird” during classes with her Year 7 English teacher, Miss Pollock really stayed with her. From these she learned about good writing, and also the importance of kindness to others. Drama Teacher Matthew Green directed her in many school productions and his enthusiastic support gave her the confidence on stage that she now carries into her life as a full time actor.

Being at Elwood College also gave her the confidence to be outspoken. Georgie believes that her time as  captain of the Year 9 Debating team, under the guidance of Mrs McDonald, taught her how to perform on stage, how to structure an argument and make an impassioned speech. This grounding built her confidence to speak eloquently, in 2015, with members of Federal Parliament to convince them to sign her petition to allow access to hormone treatment.

Overall, Elwood College, she says was a “massive part” of her life and its creative spirit “ignited” her imagination and gave her a place to grow.

By October 2019 she was offered a full time role, and in an interview with the Sydney Morning Herald on August 25, 2019 commented that; "I hope trans young people who have felt isolated before, who have lost hope, watch the show and know they're being represented. I hope they feel seen. ,And I really hope people who don't understand, who haven't met a trans person before, who maybe have some misconceptions or uneasiness about trans people, watch and see that we're just people.”

Georgie says she feels incredibly grateful to be a full time cast member and has learned more about how to be “present” in front of the camera by staying focused on fellow cast members. She looks forward to working with the Neighbours cast for the next few years and sees the experience as a potential launching pad into other television dramas or feature films.