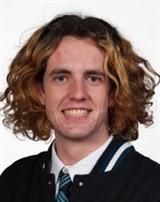 Elwood College congratulates Henry Lucas with an ATAR of 98.30

As a Year 11, Henry achieved a perfect score of 50 in Visual Communication and Design. This year, Henry will undertake a Bachelor of Arts (Music Industry) at RMIT University.

In Year 12, he received the VCE subject award for Further Mathematics, was Culture Captain and joint Valedictorian. Henry was also the recipient of the prestigious award for ‘Outstanding Dedication to VCE Studies’, demonstrating a consistent drive, dedication and commitment to achieving his personal best in VCE.

Henry has been involved in the school’s music scene since Year 7, having sung and played guitar and drums in various bands, taking part in the Battle of the Bands competition and performing at assemblies and the SRC Talent Night, winning first place in 2015 with the band ‘F.U.Z.Z.’.

Henry’s Valedictorian speech was a poem praising his teachers and fellow Year 12 students, as a “cohort so very capable of acceptance and coherence”, and labelling the Class of 2018’s memories of their time at Elwood College as a “blessing not of the mind, but the soul”.