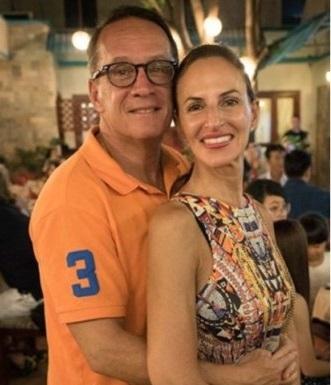 “I attended Elwood Primary School, Elwood Central for Form 1 and then completed Form 2, 3 and 4 at Elwood High. Attending Elwood High with students from many different ethnic backgrounds helped to make me aware of the outside world. Sport was also a big part of my schooling. Woodcraft was also something that helped in later life, without at the time knowing it was useful. I left Elwood High at the end of Form 4 and completed high school education at Melbourne High.”

John (pictured above with his wife Gabby Tomkin) went on to Monash University to complete an Economics/Commerce degree for three years, a Diploma of Commercial Studies and then returned back to Melbourne University and completed a Masters of Law. He worked in America for three years, completed the Bar Exam in Colorado and worked in Texas and California.

John is now the Principal at R.B. Flinders and specialises in corporate commercial law, property law and property dispute resolution.

He has been a Board member of the St Kilda Football Club for 13 years and, in 2012, was honoured when the Club awarded him Life Membership for his services to the club.

He holds a number of private company board positions and advisory roles for property companies, as well as being the proprietor of a chain of Italian restaurants across the greater Melbourne region.

John is the Director of Legal for the Maddie Riewoldt Vision, set up to fund medical research into finding a cure for Bone Marrow Failure Syndromes.