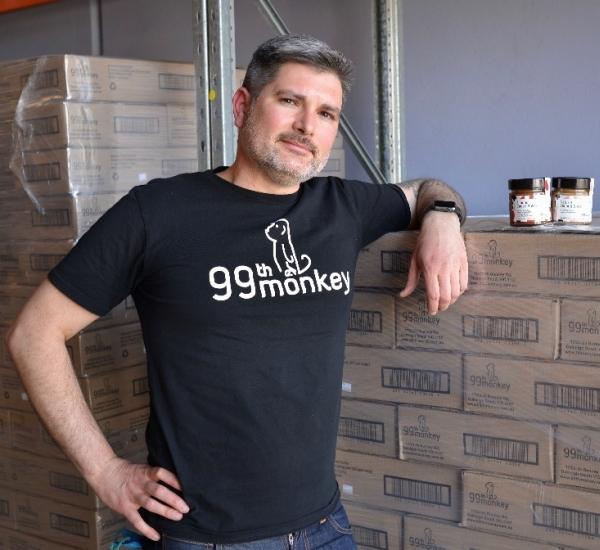 Nick is a former communications specialist and journalist at the Age and in 2012 decided to turn his obsession for peanut butter into a business. He launched his business “99th Monkey” in Farmers Markets in 2013 and then into stores and online. In 2020, the product was stocked by one of Australia’s largest supermarkets and is found in retailers around the country.

Nick attended Albert Park Primary school and then Elwood Secondary College for years 8 and 9 in 1994 – 1995.

He has very fond memories of his time at the school and still has a number of close friendships with school mates from that time. Nick “leaned towards” Humanities subjects at school and even though he was not actually in any of his classes; he remembers the caring and compassionate nature of history teacher Manny Kingsley. He also enjoyed English classes with Miss Biggins and loved the creative writing sessions with visiting award winning local writer and novelist Arnold Zable. He and others had an opportunity to read out the stories they had written on a community radio station.

Although he wasn’t the “best student”, he was involved in the SRC and was a student representative on the school uniform committee. At this time, the school did not have uniform and he and others succeeded in getting Stussy pants, very popular at the time, introduced for the boys.

The quintessential Elwood experience for him was participating in the school productions ; Year 7 with a speaking role (Dracula Baby) and Year 8 (Grease) where he played the role of Kenickie. These productions were “a lot of fun” and he really enjoyed meeting students from every level of the school. At that time, the cast members went away for a week’s “excursion” to rehearse, and there was great camaraderie between students and the teachers like Mr Howie.

It was only after he left the school, that Nick appreciated how talented the teaching staff and students were. Leonard and Slava Grigoriyan, world acclaimed classical guitarists,  were Elwood College music teachers and his friends Ash Gaudion, Julian Sheffer, Rod Gilbert and Paul Griska  started a jazz band “Jazz off the Rails” when they were 15 years old. This band , full of the “cool kids” played at the Brighton Hotel and some of its members now make up the well known “Shuffle Club”, and are jazz and blues legends.

Nick joined his older brother at Melbourne High for Years 9 – 11 and completed his secondary school at Sandringham College.

Nick went on to RMIT to complete a Diploma of Professional Writing and Editing from 2001 – 2004, then a Bachelor of Communications in Journalism from 2004-2006. He was a reporter for The Age newspaper from 2007 – 2009, was a freelance journalist with stories published in Crikey and Epicure and then for five  years from 2013 – 2018 was the editor of “Global Coffee Report”, an international business magazine informing the coffee community.

He has been the owner of 99th Monkey since 2012 and the mission of the business is to “spread the joy of simple, delicious food”. The company’s nut butters; including almond and cocoa butter,  are all handmade in Melbourne with ethically sourced and minimally processed ingredients.