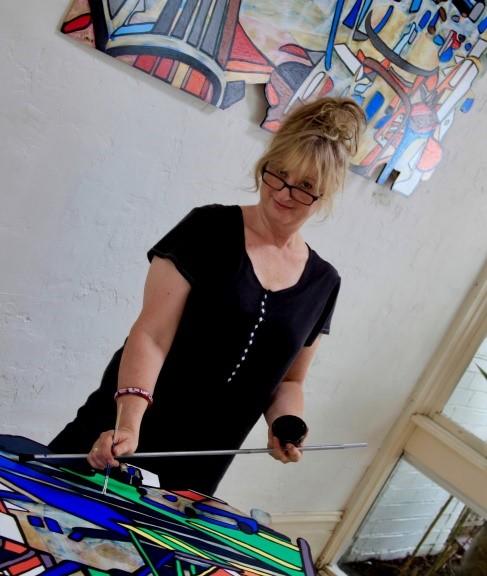 Rachel is a contemporary fine artist and is represented in numerous public and private collections in Australia and internationally. Her thematic focus is on the “experience of living in and around the urban environment”.

“I was born in Jerusalem and arrived in Australia and Elwood High in 1970 with next to no English. There were no special ESL classes at that time so when other students did French I was sent to the library and started to learn English by reading cartoons.

By communicating with all around me it did not take me long to learn English and I had a superb time at Elwood High. I did not gravitate towards those with similar backgrounds to myself. I embraced every culture and my best friend Beverley Pinder was from Sri Lanka.

Mr Whitehead, the Drama teacher, was just dynamite as a teacher and he supported me to do the choreography for school productions which included classical ballet and modern dance moves. By form 4, I was writing and singing songs on the guitar and loved Geography lessons because the teacher would give me the last 15 minutes of every lesson to sing songs to the whole class. This made him a very popular teacher!

In 1970, when I was in Form 3, us girls had to line up outside classrooms and a female teacher would come along with a ruler to measure the length of our dresses. If they were above the knee or too short we were given detention.

In that same year I remember that our very old Art teacher would make us line up outside the classroom and we were not permitted to sit until we had all pulled out our chairs and moved to the right. We were then told to “pick up the brush, put it in the water, move it to the side”.

By 1973 however, some teachers were much more progressive and we were allowed to wear pants or jeans in Form 6. Us art students were even allowed to smoke cigarettes in the Art Room which seemed like a groovy thing to do and made us all feel terribly mature and privileged.

As a student at Elwood High I never felt like education was a ‘mass production’. We were all given the freedom to pursue our own interests.”

Rachel wanted to be an actress when she left school but was not accepted into NIDA. She was selected for the Diploma of Design and Fine Art at Monash University (1974-1977) where she was awarded a scholarship and a studentship.

By 1979 she had her first (sold out) solo exhibition in Melbourne. After completing a Graduate Diploma in Education at the University of Melbourne in 1980, in the following year she taught art at the VCA’s secondary college to especially gifted music and ballet students.

In 1982 she was offered an assistant art director position on an Australian feature film which was produced in Sydney and New Zealand. Her boyfriend at the time (now her husband) also worked on the same film as a line producer. It was at that time she realised that what she really wanted to do was “pursue the ache in (her) heart and respond visually to the world through painting”.

She continued to supplement her art practice with part-time teaching, while also working in commercial television.

She has had 17 solo exhibitions, 60 group exhibitions including in Italy, South Africa and England, and was one of 100 local artists selected for “The Other Art Fair” (TOAF) organised by Saatchi Art in May 2017.

Rachel’s husband, John Hipwell, made a short documentary film about her friendship with fellow Elwood High student, Beverley Pinder and this is now part of the Australian Jewish Museum collection.