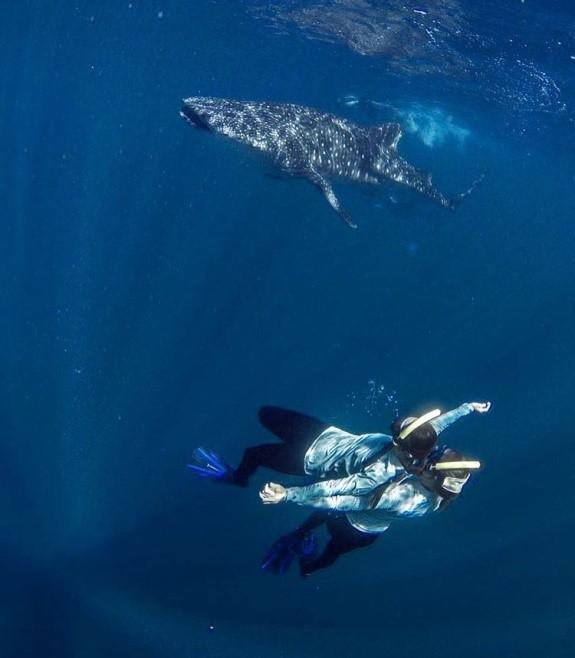 Sacha is a marine biologist and underwater photographer who now lives and works on Ningaloo Reef in Exmouth, Western Australia. She is passionate about continuing research on protection of the Great Southern Right Whale and is pictured above swimming with a whale shark on Ningaloo Reef.

“I was in the Steiner stream at Moorabbin Heights Primary School and enrolled in the new Steiner stream at Elwood College in 2001. I remember there was a real diverse crowd of students at Elwood, from all walks of life and socio-economic backgrounds.

The teachers in the Steiner program were all lovely. However, in Year 8 I moved into a mainstream class.

Miss Ireland taught me science and she really inspired me. She went beyond and above to keep us students motivated and excited by science and engineering. I remember really enjoying classes with her where we designed carts and turbines.

Miss Ireland really enriched my life. I went on summer camps that she organised at Coowinda in the Gippsland Lakes, and us city kids had an awesome time with camping and canoeing.”

After Year 12 Sacha enrolled in an Engineering/Arts degree at Monash University but discovered her real passion was in marine and freshwater biology. She studied Marine Biology at James Cook University and went onto work as a research assistant at Curtin University in WA where she investigated the acoustic communication of humpback whales and pygmy blue whale populations in the Indian and Southern oceans.

She is now in her third season working on Ningaloo Reef where she works with a company that takes tourists swimming with whale sharks and on humpback whale tours between April and September.

She and her partner have also been involved in expedition cruises with naturalists, oceanographers and marine biologists of the Seychelles, Madagascar, Maldives and India.

Along with a friend, Sacha has organised and run the Rye “Seaside Scavenge” for the past three years where people are invited to pick up rubbish from the beach, have it sorted and weighed and then the data entered into the Australian marine debris database. In 2018, the “Scavenge” will occur at St Kilda beach on January 14.

The Seaside Scavenge mission is to “inspire communities to scavenge, catalogue and dispose of litter appropriately and change their consumption of single use plastics to keep our ocean clean”.