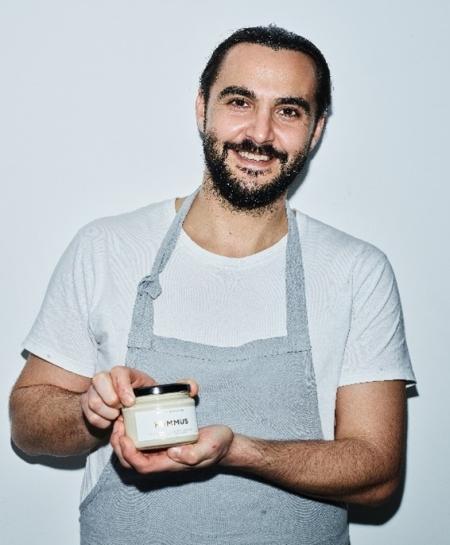 Tom was always interested in cooking and knew he wanted to be a chef; like his Armenian father and grandfather, from a very early age. After an apprenticeship at Il Fornaio in Acland St, St Kilda and The Stokehouse, he worked with admired and influential Australian/Lebanese Chef Greg Malouf at MoMo, at restaurants with him in London and then, back in Melbourne, became Head Chef at Rumi. He moved onto Bar Saracen and then when Covid hit,  opened up pop-ups and took on residencies. In 2021, he is making and bottling his signature hummus and supplies it to local fine food outlets.

Tom enjoyed his years at Elwood College, even though he was “not the most well behaved student”. He remembers his History teacher Mr. Kingsley as “amazing and intelligent and so good at knowing how to get teenagers interested in history”. He also enjoyed his Food Tech classes and remembers that his Year 12 teacher Carol Imeson was bemused when he wanted to “put (his) own twist on recipes”. He had friends from many different cultural backgrounds at school, and was heavily involved in soccer, football, basketball and lacrosse. He was the captain of the MCC Lacrosse team which played at Albert Park.

After school he wanted to get straight into work in the kitchen and was a kitchen hand at the Belgian Beer Café where his father worked as a Chef and then onto Il Fornaio and Stoke House for his apprenticeship. He picked up a cookbook one day in the Acland Street book shop and became very interested in the Greg Malouf recipes which reminded him so much of the food he ate in his grandparents’ home.

Tom “hustled his way in” to working with Malouf, an authority on Middle Eastern cuisine at MoMo in Melbourne and then joined him in the popular, Michelin star, London restaurant “Petersham Nurseries Cafe”. He then spent a year at Fergus Henderson’s world renowned “St John” restaurant in the Barbican. After a few years at other influential London restaurants including Moro, which features big Lebanese and North African flavours, he travelled solo throughout Europe and the Middle East and returned to Melbourne.

He went in as Sous Chef, and then was appointed to his first Head Chef at the Joseph Abboud owned Rumi, in East Brunswick and learned a lot there about staff management. Later, as Head Chef at Bar Saracen in the CBD,  he was very involved in menu planning and enjoyed travel in Iran and Lebanon. The owner of Rumi, Abboud, described Tom as “an absolutely beautiful cook”.

During Covid lockdowns in 2020 and 2021 Tom brought his middle eastern food to pop up summer BBQs around Melbourne and in June 2021 started bottling one of his famous signature dishes; a hummus, that took three years to perfect.

He supplies the hummus to fine food stores around Melbourne.